Physician Suicide: We Must Stop Losing Our Own

Physician Suicide: We Must Stop Losing Our Own 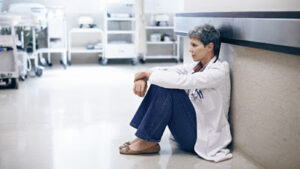 In the past few weeks, we have lost two female physician colleagues tragically to suicide, a pediatrician and psychiatrist. In the general population, males take their lives at four times the rate of females. However, for physicians specifically, the suicide rate is evenly distributed between genders; making our occupation the one with the highest relative risk for women to die by suicide. This is what I wish would change about being a female physician; we must stop losing our own. We need to support each other, love one another, and face our challenges together.

Fifteen years ago, a surgeon called me in to evaluate a child with 3 days of fever, abdominal pain, and vomiting. Her initial white blood cell count had been 36,000, but she had been discharged home from the ER with a diagnosis of viral gastroenteritis. Two days later, she returned with lethargy, continued symptoms and a white blood count on admission of 32,000. The surgeon sought my input before taking her to the operating room.

Tiffany was 12 years old the first time I walked into her hospital room. Her mother was sitting next to her daughter on the bed quietly stroking her hair. Tiffany had poor color, delayed capillary refill, and was ill to the extent she could not localize pain to her abdomen. Her vital signs revealed tachycardia, lower than normal respiratory rate of 6, hypotension, and fever. She needed fluids, antibiotics, and pressors for impending septic shock. After I stepped out of the room to write orders, she coded within minutes. Anesthesia managed her airway and I straddled her tiny body while performing chest compressions. Following a lengthy resuscitation, she stabilized.

Later that afternoon, the surgeon performed an appendectomy which included removal of 30cm of necrotic bowel, giving her the best possible chance for survival. Remarkably, she pulled through and recovered. She needed a primary care provider after discharge from the hospital; a job I readily accepted. She informed me at the ripe old age of 14, she was going to cut patients open and save their lives. She studied hard and began college classes as a junior in high school. She shadowed me countless times in my office; her enthusiasm for medicine was infectious. Her commitment to a surgical career was unwavering.

We remained in close touch after she left for college. She lost her father to a heart attack during her senior year. As an only child, her mother and best friend were her strongest sources of support. Whenever home on break, she would stop by to update me on her life and see patients with me. She graduated from college with honors and was accepted into the medical school of her choice.

Tiffany was born to be a healer; she had a laser-like focus about her future plans. During her fourth year of medical school, her best friend was killed by a drunk driver on a busy freeway. Tiffany was devastated beyond belief. Seeing her at the funeral, I knew something was terribly wrong. She looked pale, thin, and seemed despondent. Her mother recognized her sadness and thought I could help.

Tiffany was reluctant, but I insisted on going for a walk after the funeral. It was a rare sunny day and we ambled down the forest path in silence for a good while before she shared her thoughts. In her final year of medical school, she felt like her world was literally falling apart. She was lost and uncertain of what she wanted out of life. She could not eat, sleep, or find the joy she once had. I listened for a long time, before carefully formulating my response.

I reminded her of the day a resilient 12 year old girl coded right before my very eyes, yet stubbornly refused to die. “You survived for a reason. Only you can decide for what purpose you were given a second chance. Find something you are passionate about. Do it for your mother, your father, and your best friend; but, most importantly, do it for yourself. Being a physician is challenging at best and unbearable at worst. You must find a way to celebrate your successes, grieve your losses, accept the things that cannot be changed, and embrace relentless uncertainty, or you will not be able to thrive.”

Six months ago, she entered her third year of a competitive surgical residency on the opposite coast. We remained in touch but with each passing year, she has seemed more distant. There is a season for everything, and maybe we have had ours. Then a month ago, I received a letter in the mail and recognized her handwriting:

“Residency has dimmed my love for medicine. There are days I am thrilled to walk through those hospital doors and days when my heart is filled with dread. Life is too short for regrets, so I have decided to take a leave of absence and discover where my heart truly lies. Thank you for never giving up on me.

The last time we saw each other, I was contemplating taking my own life. I could not face you knowing what was in my head and my heart. You were right to be unrelentingly persistent. Your reminder that I almost died, yet survived against all odds, was the one thing I needed to reflect upon and remember. Fifteen years ago, you could have given up, walked away, and not given me that second chance. You refused to let me die. I do hold the power to direct my own life. Thank you for saving me twice.”

The journey to becoming a physician is fraught with peril. We spend years acquiring the expertise to comfort and heal others, yet those skills are attained at a great personal cost to women in particular. Among female physicians, the relative risk of suicide is 2.3 times greater than the general female population. Each and every tragic loss of a female colleague should be honored as if we lost a part of ourselves. Their struggles must become ours; their survival is imperative for us all. If you are struggling, please know, we are here, we are listening, and we care.

This essay is dedicated to every female physician, resident, or medical student who has considered suicide or taken their own life. May they find peace and comfort and may we find a way to reach out to one another when we find ourselves in need of support.