Memorial Day: My Reflection on 10 Years Without My Brother

Memorial Day: My Reflection on 10 Years Without My Brother 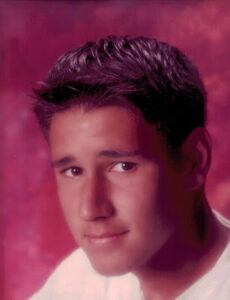 This week is the 10th anniversary of the loss of my younger brother, Laith. On the Saturday morning of Memorial Day weekend 2007, my life changed forever.
Our practice lost two children to drowning this year, and I am always reminded how precious life can be. The pain of loss never goes really away, rather we do our best to live with it.

Siblings are a part of you before they are born and remain in your heart long after they are gone. I was five and a half years old when my mother first told me she was expecting. After 37 years, this particular childhood conversation is crystal clear in my mind.

My mother had a beautiful baby boy in September 1980 and he grew up to become an extraordinary young man. It seems so long ago, yet his time here went all too fast. He took his final breath, due to an accidental fall, ten years ago. Those of us who knew him and loved him have yet to catch our breath and probably never will. It is hard to believe a decade has passed since I last looked into his sparkling brown eyes.

Much is written about grief accompanying the loss of a child, spouse, or parent. When it comes to losing a sibling, however, the literature is oddly scarce. No other relationship mimics that between siblings. It is a unique closeness forged in happiness, anger, love, frustration, and understanding, altogether coupled with similar genetic ingredients.

I naively believed lightening would not strike twice. My parents already buried one child, my older sister Laila, who drowned when she was two years old. As the oldest of the remaining four, I was fiercely protective of my three younger brothers. As we embraced adulthood, we relished the fact we were the best of friends, partners in crime, and confidantes.

These three young men shaped the woman I became, giving me a glimpse into the often elusive male world. Siblings are supposed to be our partners for life. One brother has been with me for 40 years, the youngest clocks in at 31 years, and Laith was with me for 26 before his untimely death. Many people are not married that long, no matter how many times they try.

But nothing remains perfect and nothing lasts forever. That is the first of many lessons I have learned over the last decade. Unavoidable obstacles sometimes cause time to run out for some far earlier than expected. There is no map and compass to guide us through the tragedies along the way. You just keep putting one foot in front of the other, moving forward because you must. The sun rises and sets each day despite your wishes to the contrary. Time never stops.

I never imagined saying goodbye to my younger brother so soon. His tragic death has left a deep wound that will never completely heal. It has scabbed over, but gets ripped off unexpectedly serving as a reminder of our unbearable loss.

Ironically, my husband and I were married one month after my brothers’ death. On my wedding day, he was missing. His birthday in September brings me to tears. I will never hear that voice I miss so much. I will always remember the last time we hugged and said, “I love you.” It was the final goodbye that never should have been.

A few weeks after his belongings had been sorted; I found a Ziploc bag in which he kept things most precious to him. He collected letters from his first serious girlfriend, pictures of friends, and a few birthday cards from Mom and Dad. Then I discovered assorted postcards, notes, and pictures from me. He kept those mementos, picked them up from time to time, and knew how much I loved him.

Something that cannot be lost is almost 27 years of shared memories. His smile is indelibly imprinted on my brain, his laugh can be found tucked away deep inside my soul, and his infectious personality is intricately woven into each story I share. Preparing him for those job interviews, giving him advice about girls, and helping him clean his perpetually messy apartment are experiences to be cherished for the rest of my life.

For me, the most valuable lesson learned over the past decade is how unpredictable life can be; there are no guarantees. After having four children of my own, my parenting goals are so much simpler than they might have been before. The “best-I-can-do” is good enough; everything does not have to be perfect.

My little brother grabbed life with both hands and experienced everything he possibly could in the moment. I strive to make the most of each and every day with my own children and be grateful for that time, however long or short, in honor of my little brother. He would not have wanted it any other way.