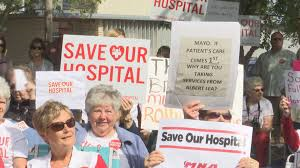 The Mayo Clinic in Rochester has held the top spot on the U.S. News and World Report hospital rankings for the past two years, despite the closure of community hospitals that negatively impact rural Minnesota towns.

Citing staff shortages, reduced inpatient censuses and ongoing financial challenges, Mayo decided to move all inpatient services from the hospital in Albert Lea, Minnesota, including labor and delivery, to a town more than 20 miles away. In response to pleas for reconsideration, Mayo Clinic Vice President Bobby Gastout callously remarked that 23 miles is not ideal — but “people are driving 23 miles to get their favorite ice cream.”

A grassroots group, Save Our Hospital, galvanized the community by answering “we like our ice cream and inpatient care in Albert Lea.”

So how will our country, from the Midwest to here in Kitsap County, ensure health care access doesn’t continue to come second to profits?

Price transparency must be mandatory at non-profit hospitals if runaway healthcare costs are to be contained. Behemoth institutions are decimating rural areas after a decade-long buying spree. A study in Health Affairs magazine found nearly half of rural counties in the United States are without hospital-based OB services, a change affecting more than 2.4 million women. According to the University of North Carolina’s Center for Health Services Research, 83 rural hospitals have closed since 2010. Hospital systems complain they are crumbling under the weight of lower reimbursements, rising bad debt from high-deductible plans, and dwindling admissions.

However, communities are entitled to see the proof in the pudding.

While touting $13 million in losses over two years as the central force behind the closure decision, in reality, Mayo misrepresented their facts and figures according to tax returns posted by ProPublica. Dr. Mark Ciota, CEO of MCHS-Albert Lea, reported the hospital lost $4.6 million in 2015, but the nonprofit’s IRS 990 form showed a net income of $2.56 million. In 2016, the Albert Lea hospital projected a loss of $8 million, though residents eagerly awaited release of Mayo’s tax returns to separate fact from fiction. Mayo conveniently overhauled its tax reporting process and filed a group return, a format which obscured financial performance of individual campuses, including Albert Lea. Allen Baumgarten, a Minneapolis-based independent healthcare analyst, utilizes public records to calculate hospital profits and losses — he estimates the Austin-Albert Lea campus generated a net income of $1.2 million in 2016.

Earlier this year, Dr. John Noseworthy, CEO of Mayo Clinic, feigned financial woes, complaining Mayo had to “prioritize commercially insured patients” over those on Medicaid and Medicare in the interest of long-term survival. Yet they had no reservations investing in the Destination Medical Center Project, a 20-year, $5.6 billion economic development initiative which will position Rochester (actually Mayo) as a global center to provide high-quality medical care to the wealthy across the world. Astonishingly, third quarter earnings show Mayo operating income more than doubled from $86 million to $182 million, with total revenue increasing 9 percent, from $2.72 billion to $2.97 billion. In 2016, international investment income was $2.7 billion, while close competitors, Cleveland Clinic and Johns Hopkins, produced less than half that amount.

Mayo benefits handsomely from public tax revenue while exempted from paying city, state, or federal taxes in exchange for “improving” healthcare access for struggling communities. While no one is questioning legality of these investments, ethically the loss of rural hospitals is hard to reconcile when Mayo pours $1.34 billion into offshore tax havens to reduce their tax liability.

Ice cream may melt on a 23-mile drive, but ill and injured people may actually die traveling that same distance. Movements like “Save Our Hospital” are garnering national attention with good reason, as they are David bravely taking on Goliath.

Places like Mayo are systematically dismantling rural care facilities without accountability for the generous tax exemptions they receive. The loss of one more rural hospital this year will be a loss for the entire nation. The battle for affordable,accessible, and high-quality health care is one worth fighting. Rural health care is far more important than ice cream.