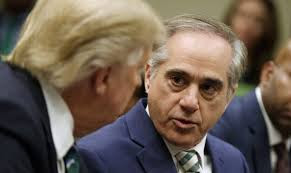 Dr. David Shulkin once gave me this advice, “stop whining and complaining and lead with solutions.” To the many frustrated physicians in this country, this critique is a fair one. I took his words to heart.

Let me start by saying my husband served 20 years in the United States Army and is a proud Veteran. I think our veterans deserve better than Dr. David Shulkin. His ousting as VA Secretary by President Trump this past week is akin to “leading with solutions” from my perspective.

Dr. Shulkin appears to have engaged in considerable double-speak throughout his 13-month tenure in Trump’s Cabinet. In his New York Times op-ed, he wrote, “I will continue to speak out against those who seek to harm the V.A. by putting their personal agendas in front of the well-being of our veterans.”

When it comes to personal agendas, there are few who are as laser focused as this man. Initially endorsing campaign pledges by Trump committing to increased accountability at the VA, his European trip—for which taxpayers paid $122,334—involved more sightseeing and shopping with his wife than “official” government activities. When the Washington Post first reported this story, Shulkin assured the public “nothing inappropriate” took place.

In February 2018, a report released by the Inspector General of Veterans Affairs contradicted his claims. It found Shulkin and his staff committed ethics violations in planning and executing the 10-day international excursion, by altering emails and making false statements to justify the accompaniment of his wife on the taxpayer-funded trip. The VA paid over $4,300 in airfare for his wife alone.

The Inspector General’s report also found Dr. Shulkin had inappropriately accepted tickets to Wimbledon worth thousands and had directed an aide to act as a “personal travel concierge” for the trip. In his op-ed piece, he feigns ignorance, “I am a physician, not a politician.” Based on my personal experience, this is a classic tap dance move by the man who should be known as Dr. Wimbledon.

Just over a year ago, I met Dr. Shulkin in his office while working in Washington DC on behalf of independent physicians. A highly esteemed colleague of mine previously worked at the same hospital with Dr. Shulkin and scheduled a meeting to discuss healthcare reform. My colleague asked for a “wing woman” and I happily tagged along. Knowing their shared history, an exchange of pleasantries seemed far more likely than the haranguing with insults that ensued. In my opinion, Dr. Shulkin was one of the most pompous men I have ever encountered.

Suddenly, he was more politician than physician. Dr. Shulkin said “physicians have no idea what they want” as if he was never one of our kind. In the middle of his tirade, he took a breath. Unable to hold back any longer, I jumped in head first. Whether shocked by the exchange of reasonable ideas or simply surprised at a physician devoid of fear, my comments stopped him cold. He replied, “huh, that might work.” Brilliant, Sir Politician.

As if on cue, his phone rang, and he let us know he and his buddy, President Trump, had important things to discuss. “Now get out of my office and don’t come back.” I wanted to respond, “if you were the last man on earth, holding the very last morsel of food, I would happily chew off my own arm before giving you the satisfaction of winning.” Instead, I gritted my teeth, smiled, and choked out the word, “gladly.” Obviously, I will not have the opportunity to visit his office again.

He closes his disingenuous opinion piece with “it should not be this hard to serve your country.” Actually, Dr. Shulkin, it IS hard, very hard. You are not a veteran yourself, so how could you have any idea what it is like on the battlefield? While selling the notion you were fired for your stand against privatization, that is hardly what happened now is it? You did not act with “the utmost integrity” in support of the 20 million U.S. Veterans. You were charged with fixing a dysfunctional system built to serve a population who have devoted their lives to teamwork and sacrifice. Our veterans deserve better than the healthcare currently being provided to them. While some vilify President Trump for his decisions, let me assure you that firing Dr. Shulkin from a position he should not have held in the first place was great for America – and our veterans.