Are Mass Shootings Caused by Firearm Access or Economic Inequality?

Are Mass Shootings Caused by Firearm Access or Economic Inequality? 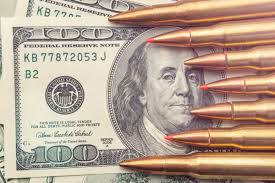 Gun violence has become a public health epidemic. Despite countless deaths in mass shootings over the last 2 decades, the Dickey Amendment—a provision inserted into the 1996 spending bill which blocked federal funding for research on gun violence—remains on the books. While every politician, media pundit, and policy expert “know” the solution, the answers are not that simple.

In reality, the factors which have fueled the rise in gun violence across America are largely unknown. And if the deep-pocketed gun lobby continues pouring millions into politicians’ war chests to stifle critical gun research, we may never know. Science must be part of the mass shooting debate. Congress must “stop dicking around and repeal the Dickey Amendment,” to fund federal research.

What if the premise that more guns cause more mass shootings—a contentious debate that has the left and the right locked in battle—is entirely wrong?

A 2018 study published in Frontiers in Public Health shows that income inequality in communities with higher than average household incomes have a statistically significant relationship with the incidence of mass shootings.

This association is far stronger than the now-debunked theory that untreated mental health disorders are responsible for mass shooting events. And while more research like the aforementioned study is necessary, it is highly likely that economic inequality increases the risk of mass shooting to a greater extent than even firearm access.

For instance, the community of Littleton, CO—where Columbine High School is located—is among the 15% highest income neighborhoods in America. Newtown, Connecticut—a once-idyllic community where a 20-year old murdered twenty children and six adults at Sandy Hook Elementary School—is located in Fairfield County, the wealthiest metropolitan area in the country, according to the Labor Department’s Bureau of Economic Analysis, yet it is also among the most unequal in terms in income distribution.

Gun violence is not a new phenomenon, the number of deaths in children ages 12-17 by shooting increased 95% between 1980 and 1994. Once considered a problem exclusive to poverty-stricken inner cities, today, gun violence has become pervasive in middle to upper class neighborhoods, which are no longer exempt from the unjustified carnage.

According to the Economic Policy Institute, the three states with the highest income inequality are New York, Connecticut, and Florida. Ironically, those same states have seen some of the deadliest mass shootings in U.S. history. Thirteen people were killed at an immigration center in Binghamton, New York in 2009. On June 12, 2016, In Orlando, Florida, 49 people were killed and 53 were wounded in a shooting at Pulse, a gay nightclub. Then, on Valentine’s Day 2018, a former student at Marjory Stoneman Douglas High School—in Parkland, Florida—killed 17 and wounded 17 more.

While it is not well understood how economic disparity is related to the incidence of mass shootings, research indicates a perspective of ‘relative depravation,’ fuels anger, frustration, and resentment especially in young men between the ages of 15-34. Those young men living in highly income variable areas tend to view themselves as “superior,” feel more entitled, and are less willing to share resources they perceive as scarce.

The touchstone of social mobility, income opportunity, and social justice have given way to a harsh new reality in America where radically different trajectories are determined by the circumstances into which one is born. The opportunity gap, known as the “Great Gatsby Curve”, has widened dramatically over the last 40 years. While household income for the lower half of Americans has barely grown, those in the top 20% of earners has soared, increasing by 75%. Those earning in the top 5 percent of Americans have seen earning growth of 95 percent. An increasing proportion of society is watching the American dream slip away.

The deadliest mass shooting in U.S. history took place in Las Vegas, Nevada on October 1, 2017. A man on a high floor of a hotel opened fire on a country music festival crowd, killing 58 and wounding 422 others. Does the fact Nevada is ranked 4th highest in income inequality in the U.S. have any bearing? Don’t you want to know if it does? I certainly do.

Economic inequality may have an even greater impact on the incidence of mass shootings than firearm access. While the rampages in Gilroy, California, El Paso, Texas and Dayton, Ohio dominate the national narrative, with all due respect, America is having the wrong conversation. Congress has a golden opportunity to right this wrong: Repealing the Dickey Amendment would – finally – fund critical research on gun violence and foster healthy conversations between policymakers, physicians, and patients.