The Understated Impact of a Public Health Officer

The Understated Impact of a Public Health Officer 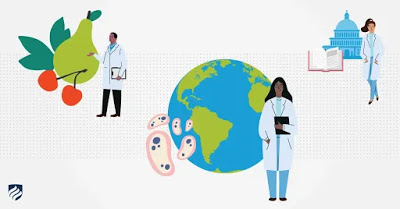 The announcement that Dr. Susan Turner, the Kitsap Public Health District Health Officer, plans to retire next July was met with little fanfare. It occurred to me that Kitsap County residents may be unaware of how much Dr. Turner has touched their lives. In reality, we are losing a passionate health advocate who has worked tirelessly to improve the health and wellness of this community for more than five years.

Over the last 100 years, life expectancy at birth has increased from 45 to 75 years, in large part due to our public health services, such as improvements in sanitation, the provision of clean drinking water and safe food, and the elimination of occupational and worksite hazards. Policy-guided public health interventions continue to address major health issues: new environmental hazards, tobacco and opioid addiction, infectious disease, racial health disparities, injuries, gun violence, and worsening maternal mortality.

The potential impact on countless lives makes the medical health officer position the single most important physician in a community, yet, at the same time, the fruits of their labor are often largely unseen. Public health is an essential part of the healthcare system. In fact, I believe the goal of universal healthcare cannot be achieved in the United States without incorporation of the already-existing public health infrastructure and collaboration with innovators like Dr. Turner.

Having more than 25 years of experience in the public health sector, Dr. Turner dove right in when she first joined the Public Health District in 2014. We collaborated serving patients at the Juvenile Detention Center where I learned firsthand, she was also a tremendous and compassionate clinician.

Throughout her tenure, Dr. Turner championed many public health initiatives, including restricting smoking and vaping in public places, modernization of the Health District’s syringe exchange program, and narrowing the focus offered by the district to prioritize funding programs which encompassed “the greatest good for the greatest number.” Dr. Turner accomplished all of this while weathering significant challenges during a time when public health services were devalued and grossly underfunded.

My own professional career began at the Kitsap County Public Health District in 1995, when I accepted a job as the Assistant Health Educator after graduating from college. I first learned that my childhood dream of becoming a doctor would come true while standing in the hallway of the old building on Austin Drive, when my acceptance to the University of Washington School of Medicine was announced by overhead page.

Since that time, I have had the honor and privilege of collaborating with three Kitsap Health Officers, including Dr. Willa Fisher, Dr. Scott Lindquist, and Dr. Susan Turner. After becoming a practicing physician, my reverence for the public health system has continually grown. I literally cannot do my job without the support of the dedicated employees working there.

My last call to Dr. Turner—which required about a half dozen conversations—was about measles. A patient too young to be immunized had been inadvertently exposed to a case of measles at a hospital outside of Kitsap county and had been seen in my clinic before being informed they had been exposed to someone with the disease.

Measles is highly contagious; up to 9 out of 10 people with close contact to a measles patient will develop measles. A child can contract measles by being in a room where an infected person has been, even up to two hours after they leave. Even worse, an infected person can spread measles to others before knowing they are infected themselves.

After realizing more than a dozen children in my practice could be at-risk, I called Dr. Turner in a state of panic. In usual fashion, Dr. Turner calmly talked me off the ledge, providing reassurance she would obtain more information before deciding our next steps. Thankfully, proper precautions had been taken to prevent spread of infection for all involved. The buck stops with Dr. Turner and for that, I am truly grateful.

I am going to miss Dr. Turner as my colleague, friend, and mentor. The Health Board has started nationwide recruitment efforts for a new health officer to serve the Kitsap community and if the Health Board finds someone even half as good as Dr. Turner, then Kitsap County should consider themselves lucky. I wish her many wonderful and quiet years in retirement, but hope she plans to keep her phone on just in case I need her calming presence and expert advice.