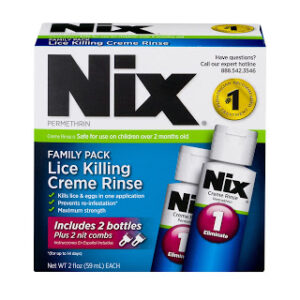 It is about time I cover a well-known parental nuisance known as head lice. This is one of those time-honored childhood rites of passage for many of us. Some make it through childhood unscathed. I was not one of the lucky ones. The first time I was in 4th grade and itching like mad before my parents figured it out. The second time I was a pediatric intern, unwittingly having had head-to-head contact with an unknown infected child.

A few call nights later, I discovered I had contracted head lice. The hospital pharmacy only had Lindane in stock, which is an older shampoo-type remedy, with negative side effects; but I was desperate. There was no hot water in the hospital to make matters worse. Basically, I took an ice cold shower, put on the medicine, stood there crying and shivering for 10 minutes, and then rinsed it out. That was the “longest ten minutes of my life.” A fellow intern with experience working in inner-city clinics sat on the toilet in the ladies room “nit-picking” at me for three hours. Bless her heart. One week later, I used Nix (permethrin) to finish off the job.

Over the last 16 years, I have been exposed countless times. Whenever I am aware of contact, I pick up a bottle of Nix, take it home, and prophylactically fight the theoretical louse that might have hitched a ride. This method has kept me lice-free for over a decade.

Yesterday, I was accidentaly exposed by head-to-head contact with another child. Our nanny planned to stop by the drugstore on her way home from my office, so I asked if she would pick up some more Nix for me. She obliged. After picking my children up after school, I had 1 hour to do a prophylactic treatment before evening activities began. I anxiously opened the box ready to get things started and to my utter shock and dismay, both bottles were completely empty. I did not know this was thing!

Apparently, someone had purchased Nix, used it at home, put the nearly empty bottles back inside the box, and glued the top shut (in hindsight, there was a lot of glue inside the box top.) Sadly, I returned to the store, explained what had happened, purchased another two bottle package, and headed home for some “louse and me” time. Hopefully, you are laughing because I was not last night heading back to the store.

I have had more than my fair share of experiences with head lice and various remedies over the years. Personally, I like Nix as it is the least damaging for my hair. However, recent reports suggest the bugs are resistant to this particular chemical. Malathion works well and 98% of lice are susceptible, but apparently this chemical is flammable, so I am not confident it is worth the risk. There is new Ultra Nix, a product on the market using dimethicone type chemicals, which destroy the little bug bodies and the lice eggs as well without being a pesticide. The hair looks greasy for about three days afterward but returns to normal after a few baths or showers.

There are “other” remedies, such as tea tree oil (possibly more preventative than curative), mayonnaise, olive oil, dawn dishwashing soap, and additional homemade approaches. The science is still out on these, but many patients swear by these methods so I include them here for completeness. Finally, it is worthwhile to mention an antibiotic medication called Bactrim. Taken twice per day, this medication damages the louse when it feeds on blood from the scalp. Somehow it ruptures their intestines. They did not even teach us this good stuff in medical school!

Last but not least, the often overlooked, yet most effective way to treat head lice in children: manually pulling nits and combing out every single tiny little louse. This can take hours and is mind-numbing work; however it is truly the best way to end an infestation in your child and in your home.

While there are some hard lessons in contracting lice, I do hope you have more knowledge to rid your child of this pesky critter. “Nit-picking” could be considered spending quality-time with your child. I know the return trip to Walgreens to exchange used bottles of Nix gives new meaning to the word ‘memorable’ for me and always will.